I've downloaded it for mac but it seems that I can't play it, I unzip the file and nothing. Please, tell me what to do

You might need an swf player/swf plugins for MAC browser.

The game won't let me access my previous save.

I do enjoy playing it in Flash but imagine if dev put in a lot of effort and move the project to Unity, switch from 2D drawing to 3D models. It'll take a lot of time... but still... I'm not suggesting, just wondering

Hi, is there a way to fix overpopulation?

Hey, how are you doing? Been a while since last update, just checking out!

i have just checked their patreon a looks like they are quite busy trying to make the switch from flash to some other engine. and that the pace has been picked up again since 2 weeks ago or something like that i can't really follow tbh.

Huge thanks for that update! I wish this page could get those kinds of announcements as well but I'm glad at least to hear that this legend is making progress once more.

THATS why... I thought the dev died during the outbreak or somethin

I tried using the .exe, but it just opens flash player without doing anything. I know I could just use the SWF but how am I supposed to use the .exe?

Really fun and interesting game, however, the save system is awfully broken on my machine. Neither downloaded or web version seems to keep a save file. An option for a manually input save would be pretty great, as a way to circumvent this issue.
It's a bit of a shame for such an interesting concept to have a glaring issue like this, but overall, the game itself is really nice. (Could use with some directions at the start, tho)

i cant find the tracks in the woods

Can you make a non-flash version please?

wait, huh? what happened to the story interactions with the tentacle monsters? the narratives about taming them. it's what I downloaded this again for.

Is there a discord or somewhere to get more reliable updates on this project? I'd really like to see the progress and more directly support the game's development.

is there hopefully a way for you to make a web version without adobe flash ? becasue... u know it doesnt exist anymore and i wanna try this strategy game(no i cant download because of reasons im not gonna explain)

Could you please make an android version?

max cap is too easy to hit and too jank

Hi!
I was playing your game quite... a lot! I saw some bugs.
There's something wrong with secret memory, because when you loose you tentacle monster by injuring or training or releasing it, the secret memory from bonding disappears with your tentacle child.
Also when you loose territory... for example. You gained Shadowcliff, Snowkeep and Lowebank. When enemies attacks your territory idk what to do! I can't lead my monster because I need at least 6 allies, but I have trained more than 6 monster on each territory and I have 8 monsters in my army. So I'm forced to loose territory. And when you loose Snowkeep and Lowerbank (for example) you have blocked Shadowcliff, but enemies didn't attacked Shadowcliff. And when you gained Lowerbank and Snowkeep again then the Shadowcliff is like a buggy bomb. It's still yours, but not somehow. It doesn't look like yours, and you can invide this, but when you do this then whole game broke. Even after winning it's not showing that it belongs to you and when you try to invide it again or other territories, whole game broke even more and you stuck with inviding screen and actions box. I have bugged like this Shadowcliff and Lowebank. You can see that is somehow is still mine so I have unlocked other territories, but is not showed like mine. And I can still invide them but when I do it... 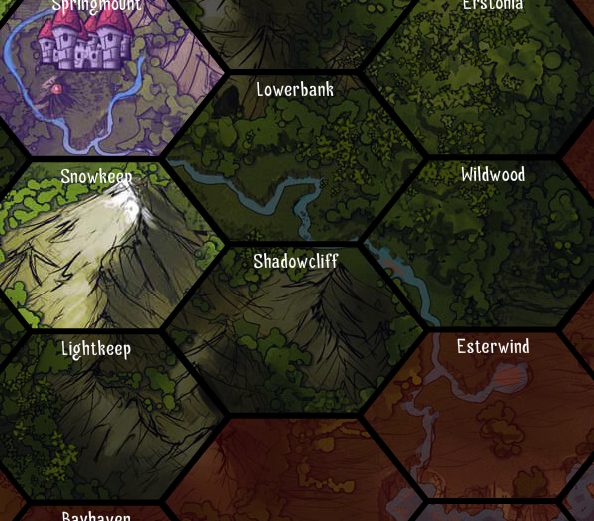 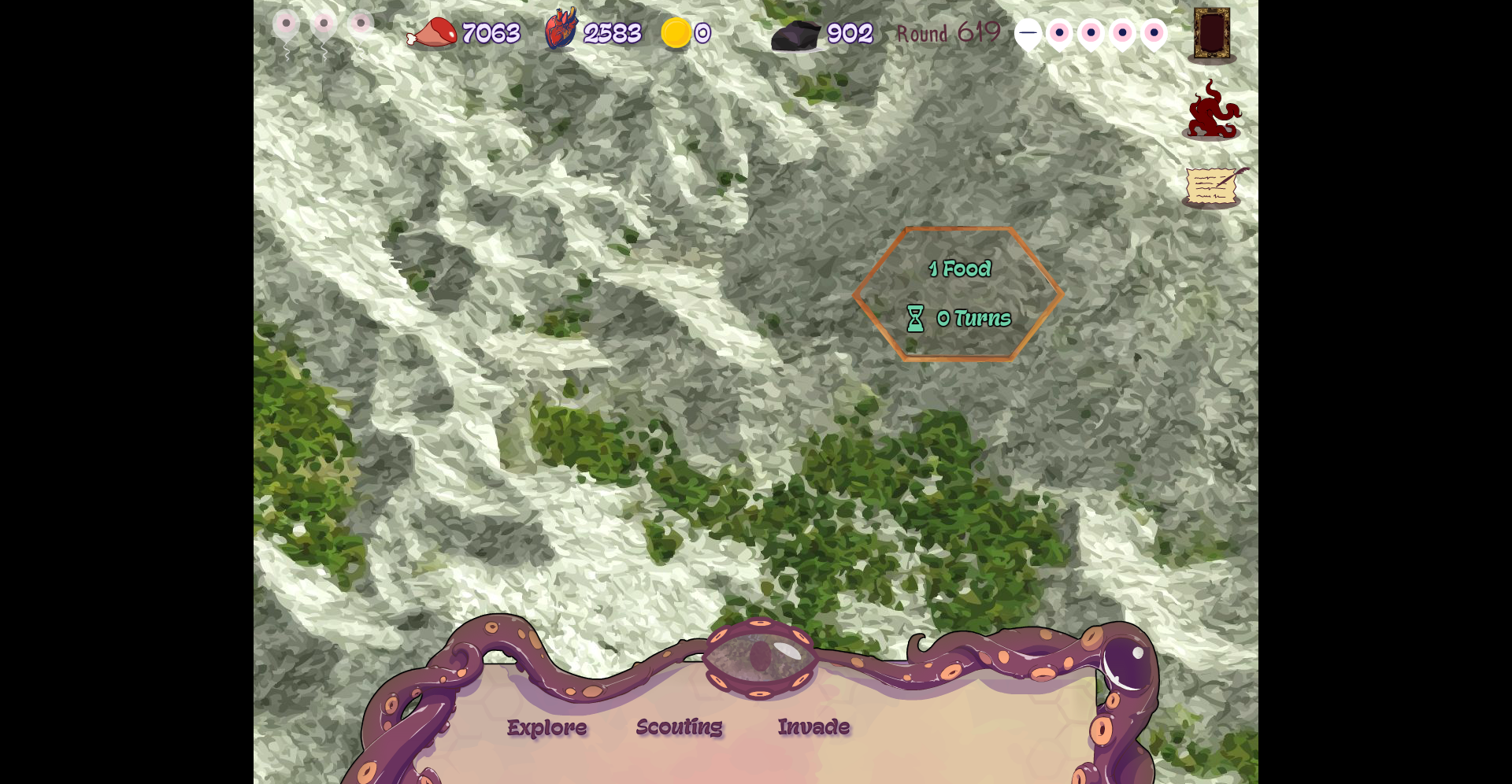 (don't mind the army It's random, because I loose it to have some space for more monsters) 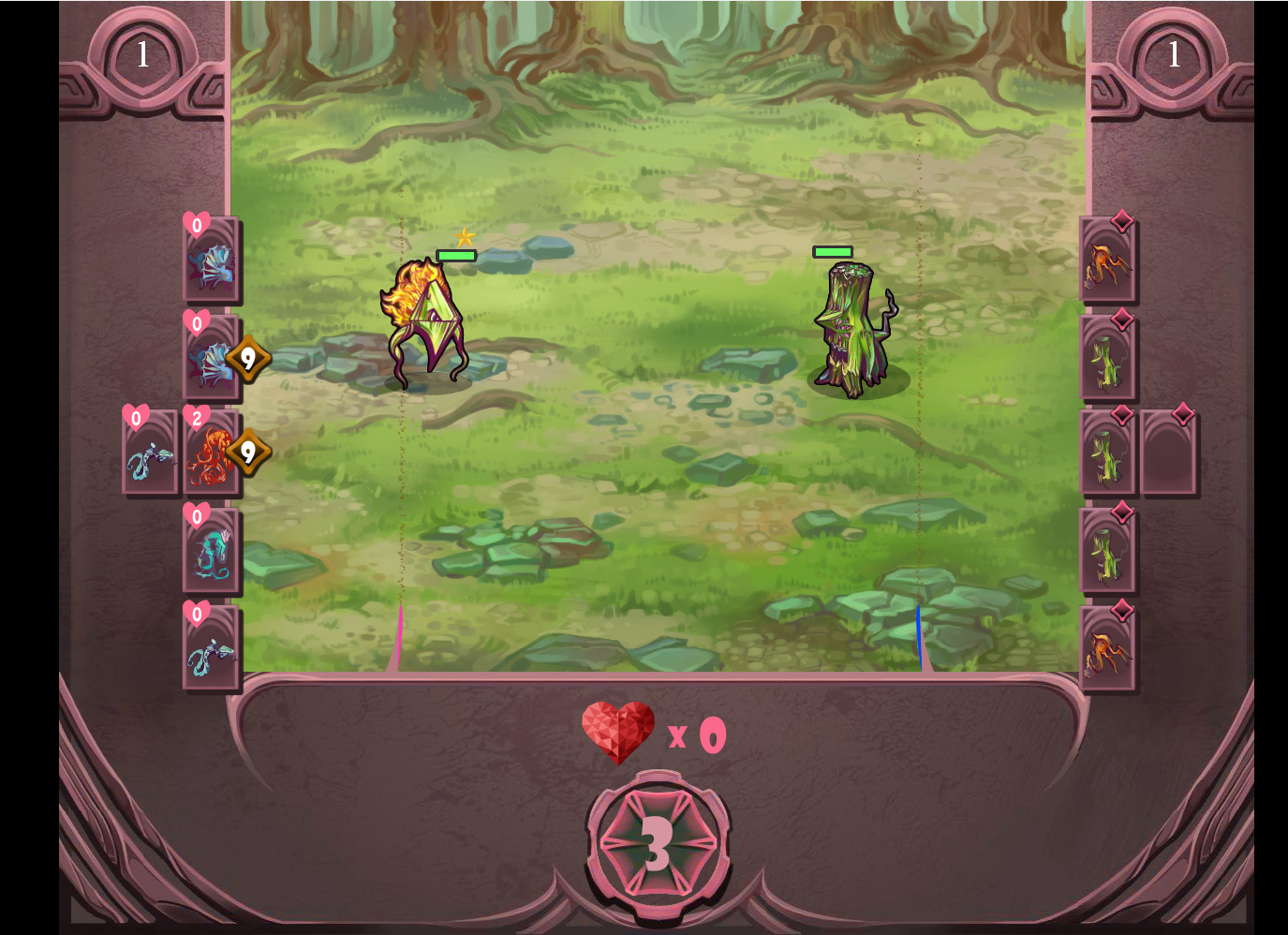 Everything seems normal from the beginning.
But you can clearly see after gaining it I can still invide it and when I will click it. This happens..And I'm stuck like this. 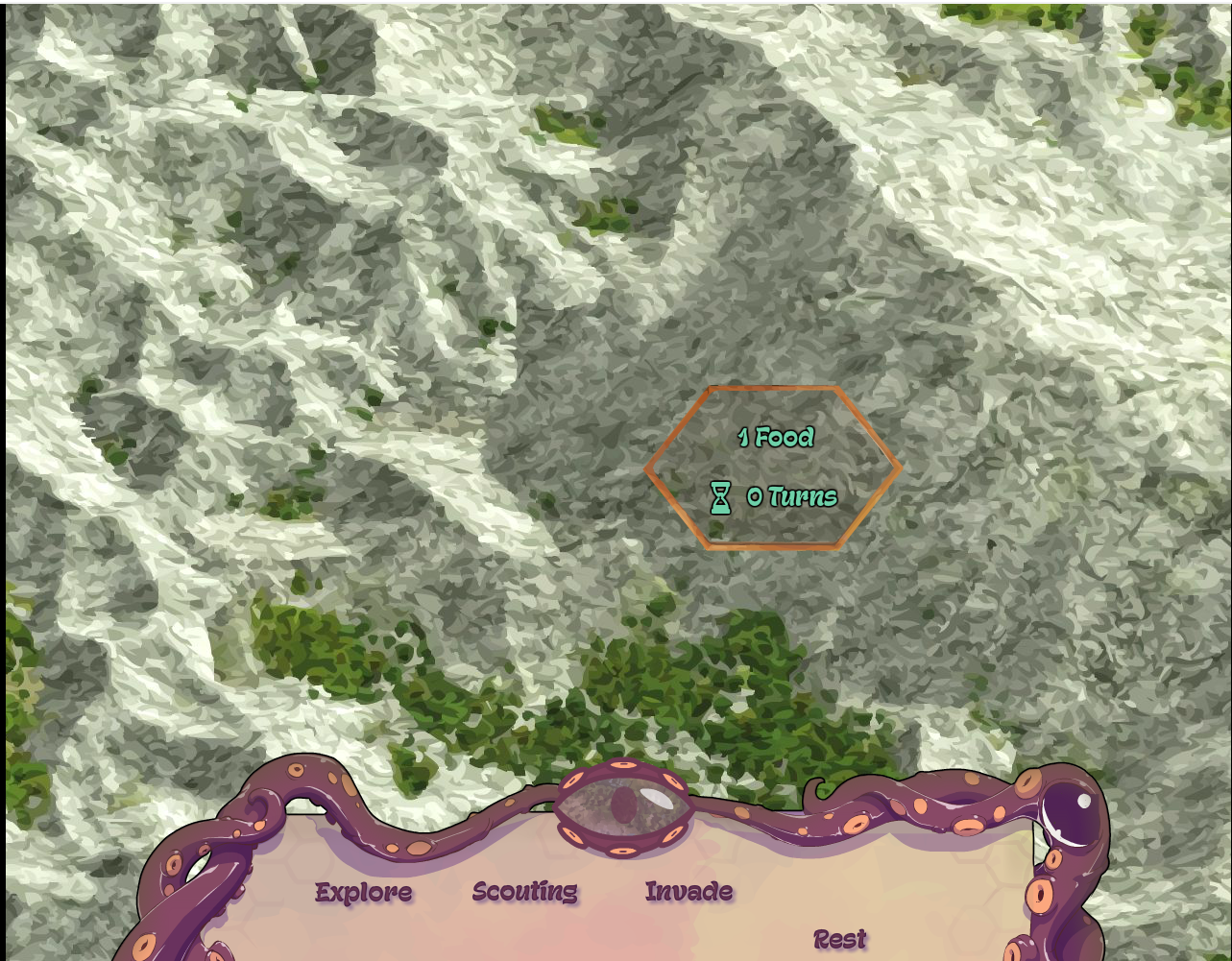 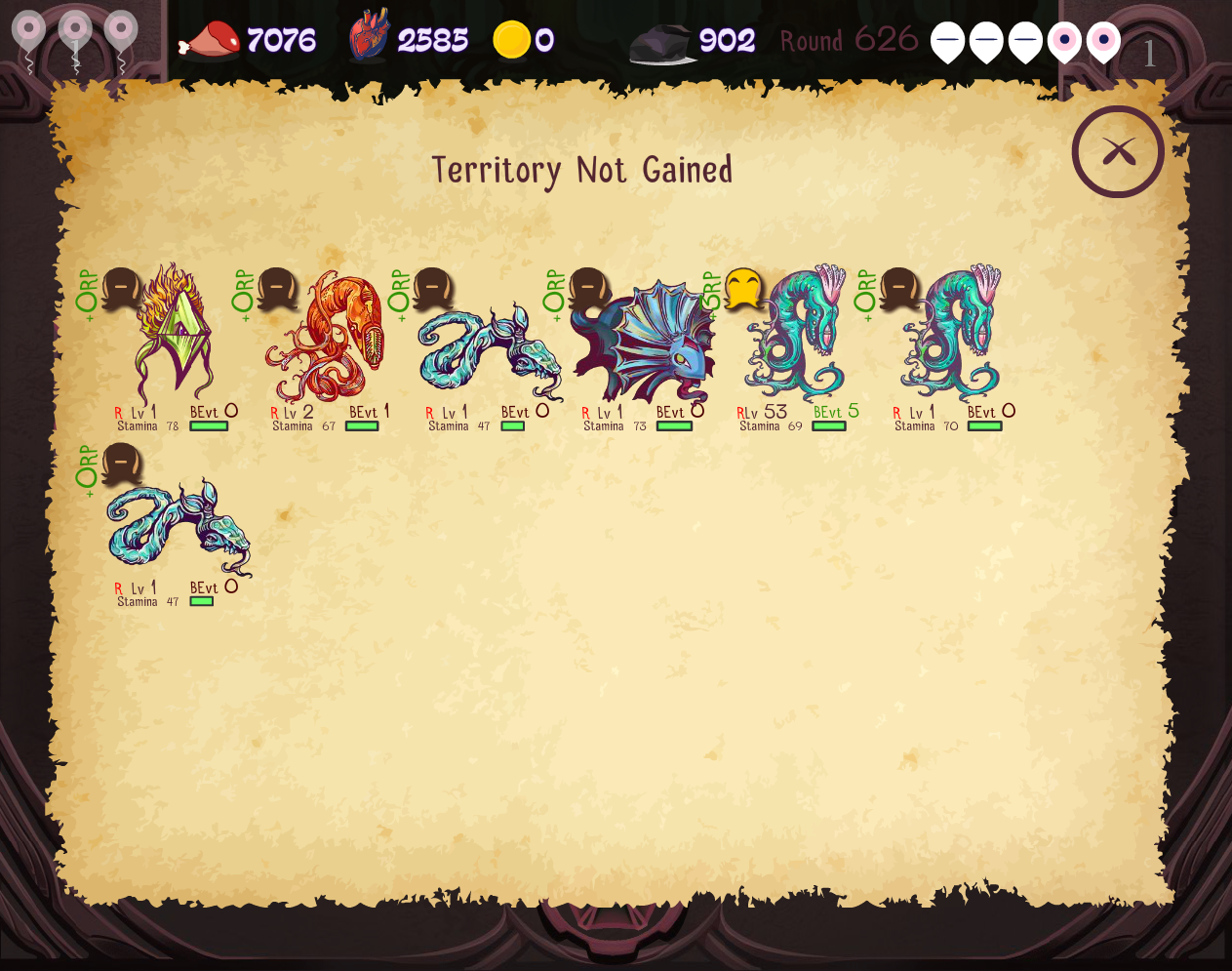 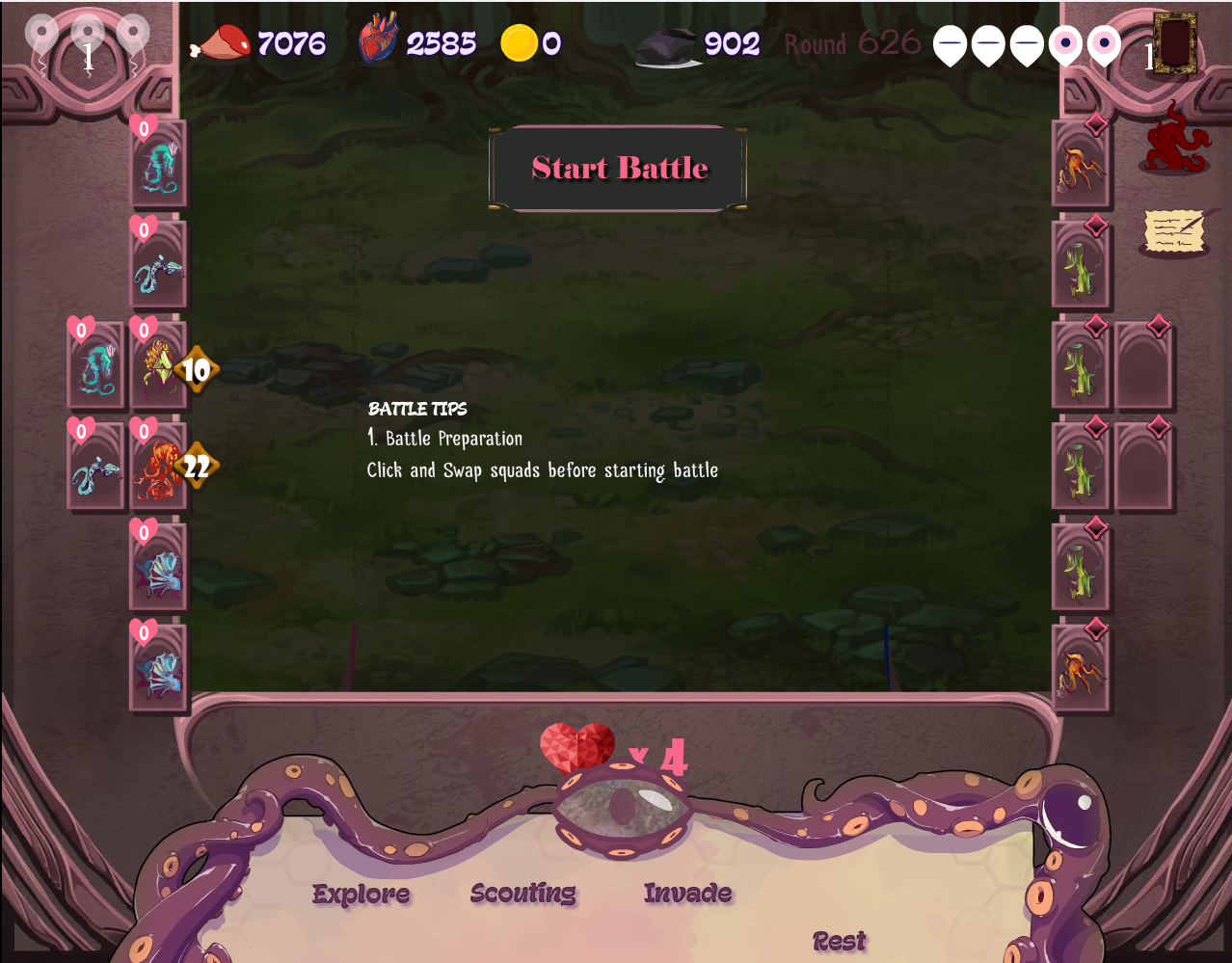 There's also one bug in fighting. When a tentacle monster and enemy kills themselves at the same time, game stops. Not crash, but stops and nothing is moving forward anymore.

I also want to add that maybe change kinda Queen's nest mechanic. I mean, to choose with which monsters to breed instead of randomly. Because breeding different monster species by hoping on game that will choose right ones is really annoying and time consuming, it makes me really tired!
And maybe more about the monster's type where to find it? Clicking on whole map looking for one is a bit boring.
Also I think that adding some build or something like that, that you can have on your gained territory to keep more monsters will be great!

But I still love this game and I hope it will be still developing to better! Love your game. Keep going!

I hope this game get remastered or something.

It says it needs flash but the link says flash got taken down in 2020. What do i do? Will my windows 11 play this.

Use Flashplayer Project Content Debugger or other similar alternative

I downloaded it anyway, and it just works. Maybe windows 11 comes with it. Thanks.

You can still play flash game without flash you can download it. You can't just play flash in browser anymore.

great game, feels broken as fuck (with bugs i mean) though. hope the updates come smoothly

nice game, but it needs alot of work, it's hard to figure out breeding grounds for new tentacles, also add a gallery so we could track our progress

finding the grounds isn't that hard if you read the joural entries. it is written in a way that you can narrow it down to 1 or 2 areas

There is a "gallery" of sorts. Go to the house area and click on the journal. There's a section in there called "secret memory" where you can relive all the bonding events you've discovered thus far.

yo to whoever created this. I've been meaning to say this but pls change the length for the legs in the H-acene for Dolphy it's very disturbing to do the "deed" if I see those legs every time PS. thank you.

Any chance for a android port?

tbh android port for this game isnt officialy from game developer, that was from fanmade who want to make this game available to android device.

I want the APK file too if thats ok

I have several questions. how do I fight? how does the currency work? where can I use my coins if I have them? how do I expand my knowledge so that I can explore? why are the tutorials so fast to end? how do I fix the overpopulation? how do I feed? I encounter some bugs.

First, the tech tree is the tentacle-looking icon in between the book and the note paper. It provides hints on how to advance your skills. Second, the combat system is a lane-based autobattler. Once you unlock some things and scout a territory, you can pick a "royal army" and invade other territories with it. Burn hearts to activate your monsters' special abilities. As for overpopulation, the only solution I've found thus far is to quite literally work my tentacles to death. Once they use up all their energy hunting, scouting etc, they become wounded and may continue to take damage until they disappear.

As for feeding, I don't think it's implemented yet, at least not in the public build. It looks like feeding is going to appear as an unlockable ability, like scouting.

If anyone wants to ruin the fun and just watch the animations+ending art for each creature interaction, I have an interpolated showcase here @ 60fps:

Haven't been able to get this game to save when launched from itch, even with admin level set on the executable and itch. running the executable by itself? works just fine, saves just fine. itch launched can load but not save..so very strange.

Can yall update it to HTML5 instead of flash so that browser play is achieveable?

When will be the next update?

As someone who downloads many SWF's for offline use/bypassing flash player blocks, here is some stand alone flash players version 16(for older swfs), 32 is newest so use that for this game, swiff player for swf's that you need to bypass "can only play on this site" message on some, has seek bar. enjoy, saves the headache trying to enable flash then disabling again.

^that link has the Mac/windows version 32 standalone flash incase you don't trust the ones i uploaded, but they don't have the v16 for older swfs. They renamed it to projector.

How can i play this on android?

Tentacles Thrive v5.01a Public release - i tok a neighboring area and all the ui disappeared ,  had to quit :(

That's been a bug in this game for over 2 years and is still apparently unsolved. You can try running the game with 'run as admin,' that sometimes solves the problem for people but it isn't a perfect solution.

Just wanted to throw a couple dollars your way and say; happy to see you're still around!  I was one of the first to see you propose your project and offer some feedback over on ulmf.org (user: tesseract)!  'bout to download this and see how far it's come!

wait so do you bond with your offspring by having sex with them??? or am i misunderstanding? im a little confused

would love if someone could answer this thanks

Well its free and I don't think you are being forced to play this game. Also I'm not the dev why are you upset with me?

I love the game, I find the gameplay to be unintuitive and difficult to work with, but the art is gorgeous

I'd like to rewrite it in Unity.  Maybe nothing comes out of this since I'm super busy but would you be open to talk about this?

Please do, I've been desperate for a version of this game with usable controls and an actually functioning save mechanism. I would love to see this game refurbished!

How does one save the game?